Video: Bouncer beaten by Detroit police officer was then jailed for days on bogus charge 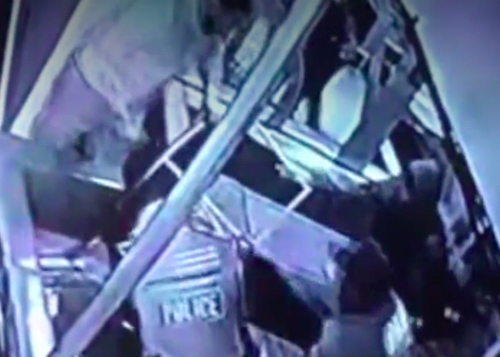 A routine liquor license check descended into violence Thursday when Detroit police beat a bouncer who pulled away when an officer tried to stop him.

Michael Kennebrew tells Fox 2 he felt demoralized and helpless during the incident at the downtown bar where he works, knowing he could face greater danger if he defended himself.

"Another officer had a Taser that was in front of me coming towards my face area, so I didn't want to make any moves," he said. "I just rode it out 'til it was over."

The incident inside Minnie's on Larned was captured on Project Green Light cameras.

Fox 2 reports the confrontation began after a female officer asked Kennebrew, who says he was unarmed, whether he had a weapon. He told her no.

When Kennebrew pulled away from the female officer, a male officer pounced, took him to the ground, and started wailing on him.

Kennebrew was then arrested for assault on a police officer and held in jail for nearly three days. The charge was denied for insufficient evidence, Fox 2 reports, citing an anonymous source.

Kennebrew has lawyered up. The department says it's looking into it.

‘Deeply Broken:’ How Detroit Lets Bad Cops Off the Hook