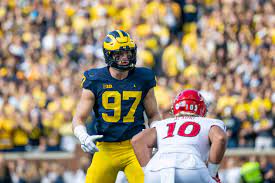 The Detroit Lions used the #2 pick in the NFL draft Thursday night to select defensive end Aidan Hutchinson from the University of Michigan.

Lots of Michigan fans were hoping the Lions would pick Hutchinson.

His mother, Melissa Hutchinson was thrilled by the Lions' decision.

"This is what we wanted," she said in an interview on ABC. "He's  going to give his hometown everything he's got."

Later in the night, the Lions put together a deal to move up 20 spots from the final pick in the opening round to get Alabama wide receiver Jameson Williams.