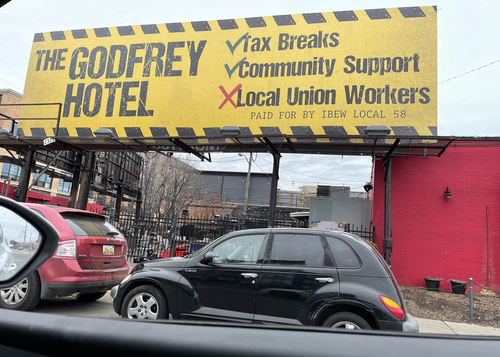 A squabble between the International Brotherhood of Electrical Workers union and a real-estate developer over a high-profile Detroit project has gone high-profile itself. 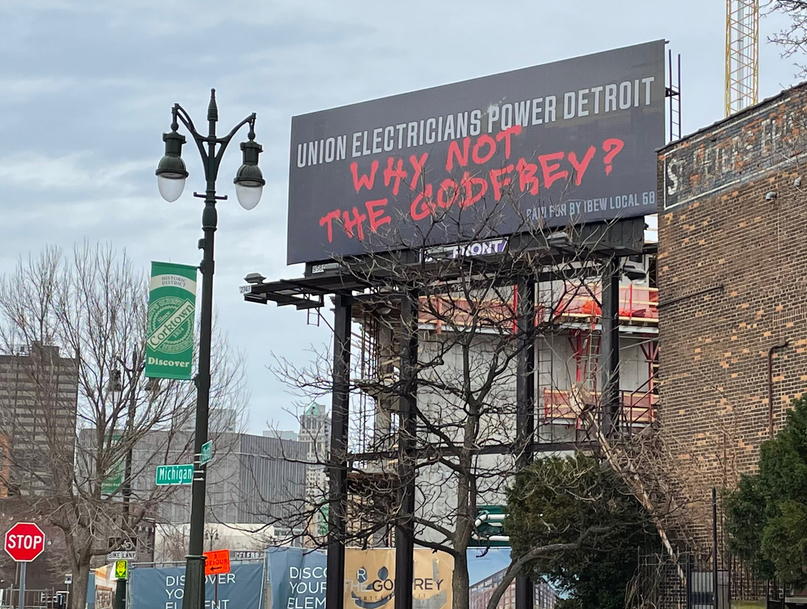 One of the two billboards the IBEW erected. (Photo: Violet Ikonomova)

The IBEW Local 58 erected two large billboards in Corktown, accusing developers of the under-construction Godfrey Hotel on Michigan Avenue of bypassing union labor for a project that received tax abatements.

The developer, meanwhile, issued a statement saying it is not anti-union, but the cost of hiring union electricians was simply higher than it was willing to pay for the project, estimated at $74 million.

The billboard campaign is an aggressive move, acknowledges Byron Osbern, business representative for Local 58. "But it was 'enough is enough,'" he said. "They’re right in our back yard," a two-minute walk from the IBEW hall to the Godfrey site.

Osbern said the union has tried to work with developers in the past, but “'next time' never comes." So they took the gloves off: "Putting up that billboard, we haven’t done anything like that for years."

Seth Herkovitz, chief operating officer and partner in Hunter Pasteur, the co-developer of the Godfrey, said in a letter to the Corktown community that the IBEW unfairly paints the company as anti-union. In fact, the letter stated, between the Godfrey and another nearby project, the Perennial Corktown Apartments, more than 80 percent of subcontractor contracts are using union labor.

But for the electrical work on the hotel, Herkovitz wrote, the cost difference between the lowest union and non-union bids was $1.5 million, a 26.7-percent margin.

"Simply put, our project cannot afford a 26.7 percent premium," he wrote. "Unprecedented construction cost inflation continues to pressure the economic viability of ground-up development. ...Without cost discipline, our projects would not have commenced."

Osbern said he believes the union offers more to developers, including training the next generation of electricians, as skilled labor grows scarcer. And he said he hopes the parties can come to terms in the future.

"For future projects, we don’t have to go this route," he said. "We didn’t go nuclear, we just put a billboard up."