Sorry haters: Ex-49ers QB Colin Kaepernick, known for his social-justice gesture of taking a knee on the field during the national anthem, will be back in the spotlight this weekend, in Ann Arbor. 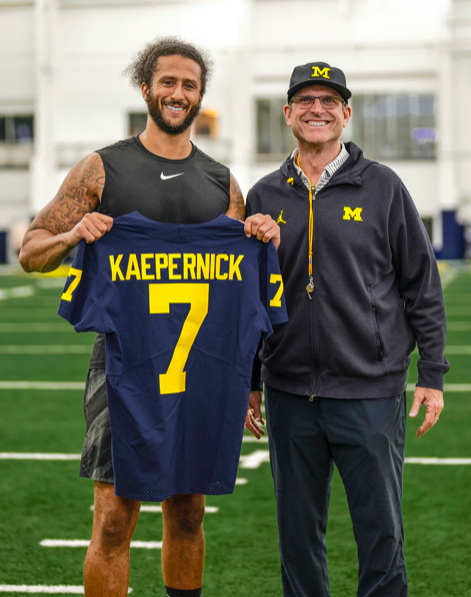 Kaepernick was named honorary captain of the University of Michigan Wolverines spring football squad, who play Saturday at Michigan Stadium.

The university tweeted photos of Kaepernick Wednesday, including one of him holding a maize-and-blue jersey with his name and number 7, along with his former 49ers coach Jim Harbaugh, who now coaches at Michigan.

Kaepernick has become a lightning rod in recent years, beginning with his decision in 2016 to kneel during the anthem, as a protest against racial injustice. The gesture divided football fans, some of whom supported him, while others questioned the quarterback's patriotism. Harbaugh himself had to clearify his own statements on Kaepernick, according to The Detroit News:

“I acknowledge his right to do that,” Harbaugh said at the time. “But I don't respect the motivation or the action.”

“I apologize for misspeaking my true sentiments,” he wrote. “To clarify, I support Colin's motivation. It's his method of action that I take exception to.”

Harbaugh later called Kaepernick "a special person and a hero, in my opinion.”

Kaepernick has not played in the NFL since, but has been widely lionized by supporters. He was the focus of a Nike ad campaign in 2019 that sparked an unsuccessful boycott.

Excited to share the field with our honorary captain for Saturday's Maize and Blue Spring Game, @Kaepernick7 #GoBlue 〽 pic.twitter.com/2H6Yj2Ivwl