Security fears linger for some Oxford High students traumatized by deady gunfire nearly four months ago, seven Board of Education members were told. 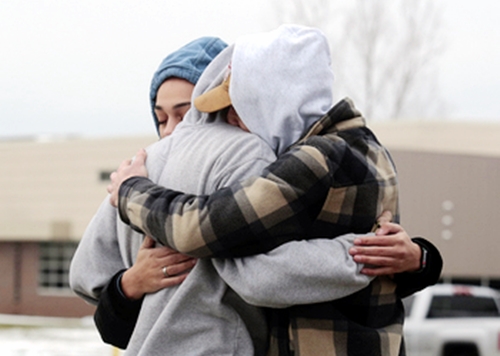 Speakers at a Monday night meeting included a freshman identified only by first name in WXYZ coverage:

Students like Madeline, a freshman, voiced their feelings about the tragic day.

"I try and walk into that school that I call home bravely, walking in because that's what we're supposed to do. We're brave, we're strong," she said.

"You shove that word strong down our throat as if it's supposed to fix anything, but the real question, I ask myself is it really over?

"If it is over, then why am I still thinking it will happen again? I'm stuck, why am I still stuck? ... I'm stuck remembering all my classmates running for their lives going: 'This can’t be happening. Run. Shooter. Help us.'"

Administrators said bag checks and a clear backpacks requirement will continue, according to the station.

Locker use is still prohibited and more officers will be brought in to help the district. ... Weapon detection software and the possibility of bringing in ammunition-sniffing dogs were also discussed

One voice that stood out among the others was Steve St. Juliana, the father of 14-year-old Hana St. Juliana, who was one of the four students killed in the shooting. The others were Madisyn Baldwin, Tate Myre and Justin Shilling.

Steve asked the school board to consider adding photos of the victims to a memorial that is being discussed for the school. But, in a previous school board meeting, a school leader said it may be triggering.

"Is a picture of my daughter really a trigger?" Steve asked. "So many triggers in the school right now, like armed officers."

St. Juliana asked trustees to consider a poll, asking students and families what they want.

Another parent, George Stoffan of Oxford, asked for more details on how his two high schoolers are protected.

"My daughter doesn't see very many [officers] at this point. The main issue for her is she is scared. She thinks this can happen again. And she is always looking over her shoulder," Stoffan said. ...

"I hope to gain a better understanding of where the district is when it comes to security in particular at this point."