Hockeytown, meet 'The Louis:' A residential high-rise that could replace the old Joe 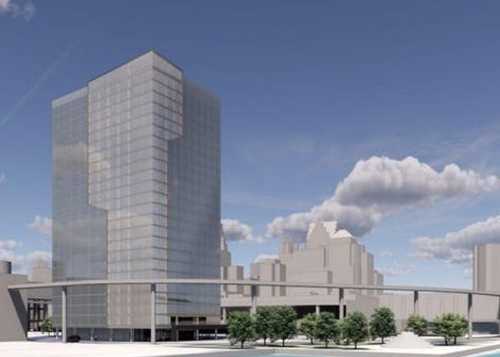 The concept called "The Louis."

The old Joe Louis Arena site could be home to a 24-story residential tower with 500 studio and one-bedroom apartments if its developer follows through on a concept submitted to the city.

Similarly to other new Detroit apartment buildings, the hypothetical tower right now has a male first name that draws from history: The Louis. Perhaps dissimilarly, its description reads a bit like an art museum placard that requires a couple glances to fully comprehend.

"The Louis draws upon the rich industrial character of Detroit with the forms and materiality that defined the industrial character of the nation," the plan says. "While reflecting on the dominance that Detroit has enjoyed in the past, The Louis will forge a new direction for the city and serve as a distinct destination for decades to come. Upon completion it will reset the bar as the preeminent place to live, work and play within the city."

Crain's first obtained the concept from the city via a public records request. The developer, Sterling Group, whose founder, execs and spouses donated thousands to candidates in this week's council elections, has yet to make a public announcement regarding the site.

The Torgow-family run company bought development rights to the Joe and a parking deck for $14 million from one of the city's bankruptcy creditors in 2019, Crain's reports. As part of the deal, it reimbursed the city for an estimated $12 million in demolition costs.