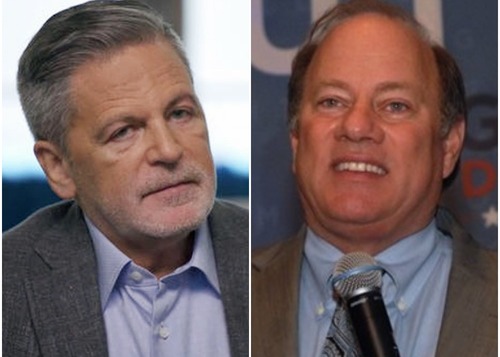 Gilbert and Duggan are among the bill's boosters.

At last month's Mackinac Policy Conference, Detroit Mayor Mike Duggan forecast a downtown transition from office to residential space over the next several years as part of a nationwide trend.

This week, we're learning who may help facilitate the change that would reportedly cost an upwards of $150 per square foot. It's you, the taxpayer.

Crain's Detroit Business reports a new Congressional bill "to offer developers a sweetener to turn old office buildings into residential, institutional, hotel or mixed-use space" is generating "some buzz locally, with Detroit Mayor Mike Duggan coming out in support, along with the Downtown Detroit Partnership and the Detroit Regional Chamber." Dan Gilbert, naturally, is also down.

The Revitalizing Downtowns Act was introduced by Michigan Democrat Sens. Debbie Stabenow and Gary Peters, along with Democrat Rep. Dan Kildee of Flint and others in the House. It would establish a new 20-percent federal tax credit to support the conversion of excess office space that may have emptied as a result of a pandemic-era pivot to working from home.

This will be done in the name of stimulating the economy and include an "affordable" housing component, though often units designated as affordable fail to address the true housing needs in Detroit.

Modeled after the Historic Tax Credit, the Revitalizing Downtowns Act would provide a credit equal to 20% of the Qualified Conversion Expenses in converting obsolete office buildings into residential, institutional, hotel, or mixed-use properties. An obsolete office structure is a building that is at least 25 years old, and the bill requires 20% of the units in a residential conversion to be dedicated to affordable housing.

Though Gilbert's Bedrock real estate company supports the plan, it tells Crain's it currently has no plans to convert any of its offices into residential.

"Bedrock is in strong support of the proposed Revitalizing Downtowns Act," Kofi Bonner, CEO of Gilbert's Bedrock LLC real estate company, said in a statement. "Shifting work patterns are a reality and we believe it's incredibly important to provide downtown property owners across the U.S. the flexibility to adapt to the marketplace as the future of work unfolds.