Bowens: A Surprising Message in Detroit About the Covid Vaccine 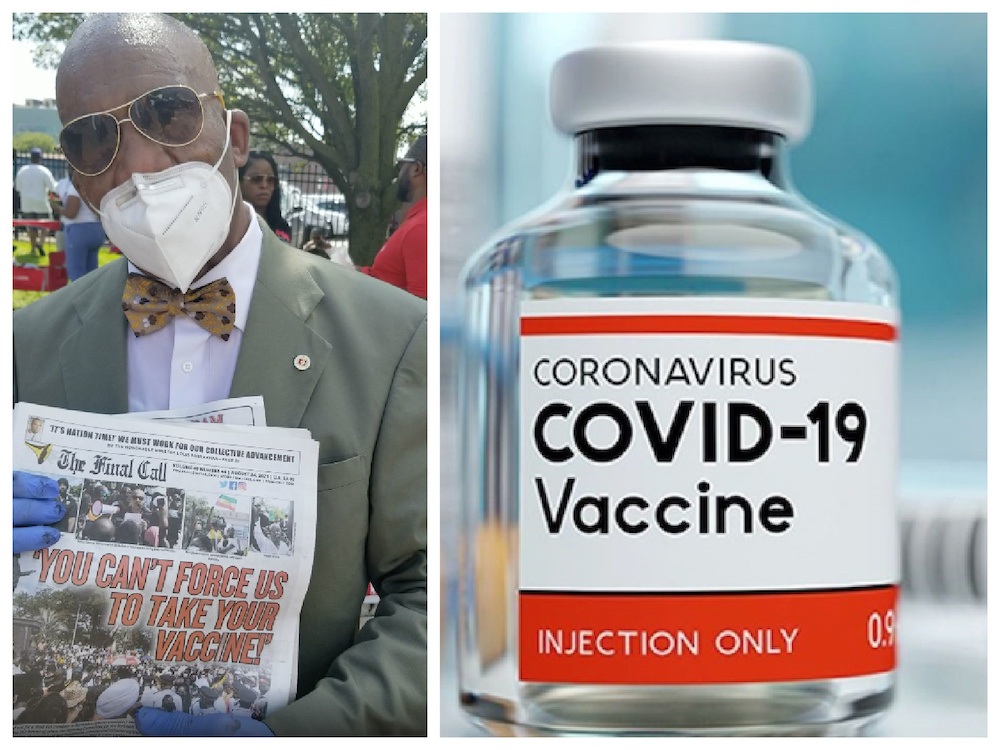 Longtime Detroiter Brother Ernest Muhammad is trying to save us. At a spry 81 years old, he’s earned the right.

“Final Call, my brother,” he politely asks two men as they pass by. “Final Call my sister,” he repeats gently to women as he holds up the Aug. 24 edition of the weekly newspaper, published by the Nation of Islam.

Most people walk on by with a polite “no thank you.”

Brother Ernest’s clothes are soaked with sweat. The sun beats down on his hatless head.  He’s dressed sharply in a summer green suit with matching dress shoes, white shirt, striped bow tie and sunglasses. Perspiration sparkles in beads on his bald head, giving him the halo effect of a holy man.

His attire, polite mannerisms and cool confidence in the face of a largely indifferent crowd marks him unmistakably as a member of the Nation of Islam, Muhammad Mosque #1 on Detroit’s west side, an all-Black Musllim sect.

Trying to Save Us

I stop to spend two bucks for a paper. Brother Ernest reaches into his left pocket to give me change for the $5 bill I gave him. He pulls out a crumpled $1 bill and holds it in his nitrile-gloved hand while shifting the stack of papers he’s holding to complete the transaction. I offer to pay it forward and buy another paper for the next person who might not have the money.

But Brother Ernest is trying to save us – me at the moment – and knowledge is power. I walk away with an earlier edition of The Final Call as well. 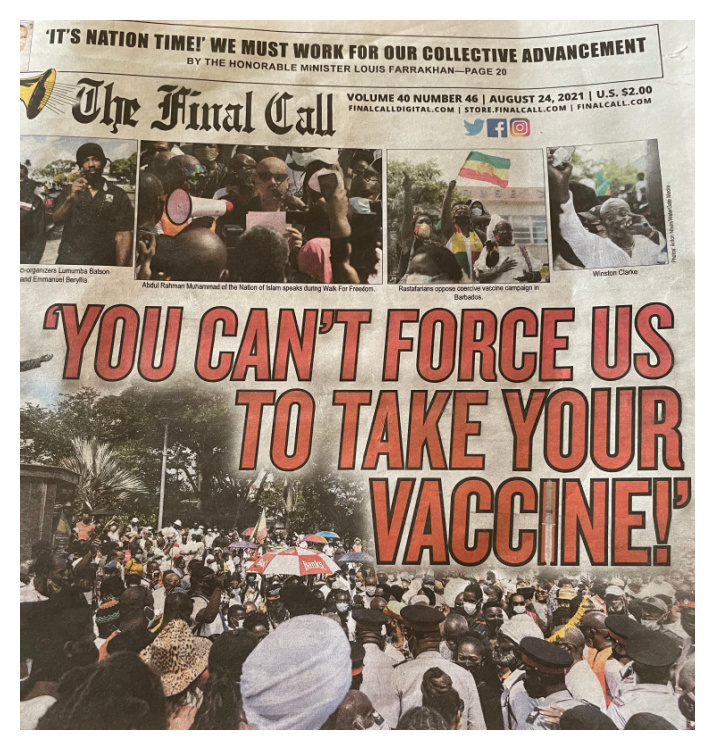 Front page of The Final Call

I sit down next to a streetlight behind the line of vendor trailers and tents to read. Anchored in the middle on the front page is a picture of a sea of Black people with the headline, “YOU CAN’T FORCE US TO TAKE YOUR VACCINE.”

I wonder where, here in the middle of Detroit, in a city with a vaccination rate hovering around 40 percent, are people being forced to take the Covid-19 vaccine? Then I read the caption under the picture and realize nobody – no government entity, anyway – is forcing us to take the vaccine here, but apparently they are in Barbados, where the picture of a mass protest was taken earlier.

Curious, I read the paper from front to back. I find news I can use about the struggle and successes of Blacks from Chicago to the Caribbean and around the world.  I learn strategies on eating healthier, living longer and developing spiritually. Interesting reading, for sure.

There’s also a full-page ad headlined: “Why We Must Not Take Their Experimental Covid-19 Vaccinations.” It’s promoting anti-vaccine lectures on DVDs ($10) and CDs ($5) from three Nation of Islam student ministers.

Brother Ernest continues to gently reach out to people walking by at the festival. Some stop to buy the paper.

Inside the paper are ads and stories about the horrible history of medicine through the ages. Humanity’s cruelty is on display, from experiments on Jews in Nazi concentration camps to the Tuskegee experiment on Black men. There’s even information about a 1945 Malaria experiment, conducted on white male prisoners at the Statesville Penitentiary in Illinois. All of which leads a reader to surmise that the world’s governments and medical community cannot be trusted and that the latest vaccine effort against Covid-19 is really no different. 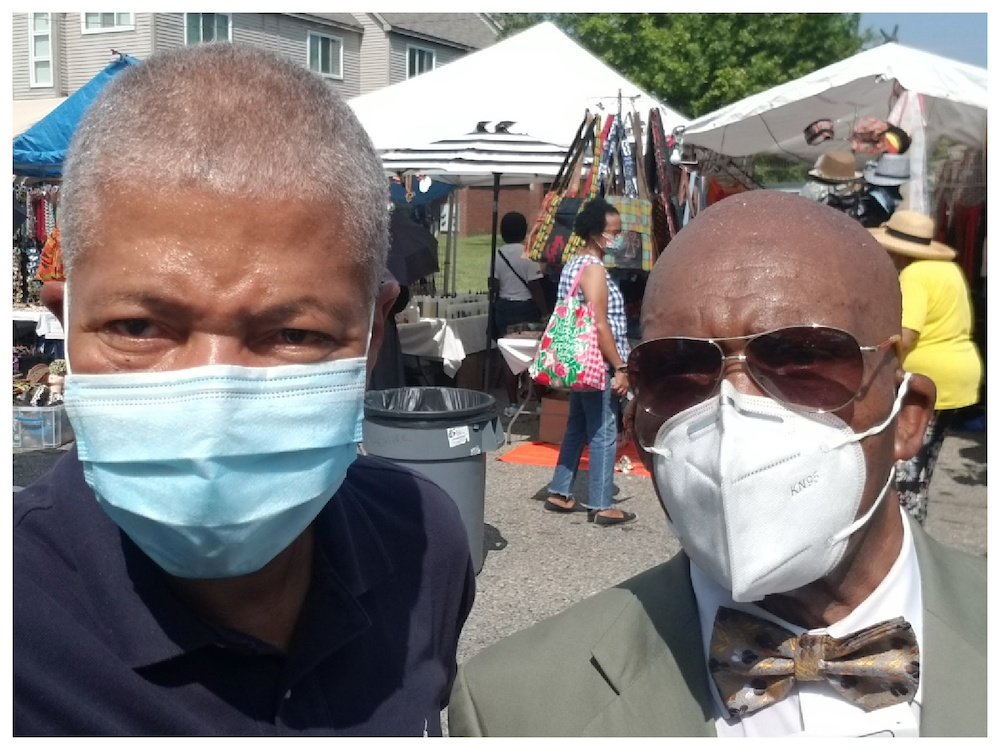 I get that the history of man’s cruelty to man is real and unfolding. I also get the vaccine effort. It’s how we eradicated everything from mumps to polio. The full approval by the Food and Drug Administration for the Pfizer shot came one day after I speak to Brother Ernest.  So, as far as the public consciousness is concerned – the experiment is over.

I ask Brother Ernest whether the full FDA approval will change his mind about getting the vaccine himself and he says no in the attached video below.

I like Brother Ernest Muhammad from Muhammad Mosque #1. He believes he is trying to save us all. At 81, he’s earned my attention. I respect and appreciate his effort and wisdom. But I think the science behind the vaccine is sound and encourage everyone to follow the Centers for Disease Control and Prevention guidelines and get the vaccine.

A block away, I encounter a tent set up by the City of Detroit to give Covid vaccines to walk-up takers. Around 4 p.m. I ask the people staffing the tent how many shots have they have given since they started at 11 a.m.